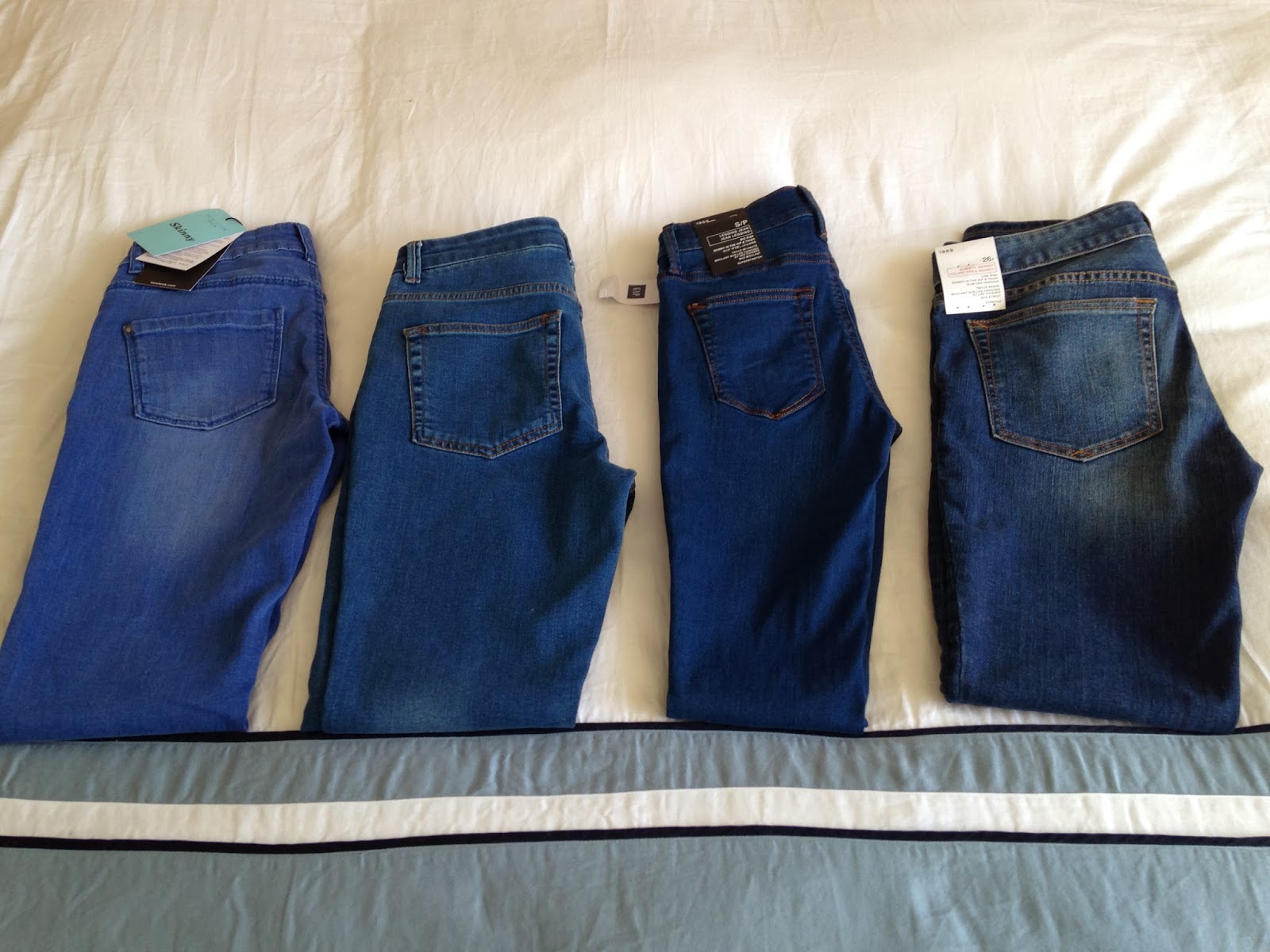 Like many things to do with clothes, I’ve thought long and hard about my jeans. I don’t think that I have ever spent more than about £60 on a pair of jeans and generally I spend quite a bit less. I’m fairly lucky in that I don’t find it hard to get them to fit and I’d rather spend the pennies on something else. Having said that, I have put plenty of women in more expensive jeans, and for them it has been totally worth it.

Feeling in need of a bit of jeans update for the spring (most of mine are really old and pretty unflattering too) and fancying a pair that were just the right shade of  blue (which is hard to describe as lots of jeans are blue) I thought that I would do a little experiment.

I’d spied some that I liked in Whistles so I tried those, along with two pairs from GAP and a pair from New Look. I also hovered over the Topshop ones but knew that our eldest was in  the market for a pair, so didn’t want to cramp her style by getting there first – but I do really like the Baxter ones. Really I wanted to try the jeans side by side to see whether I could feel the difference in cut, comfort and composition – and to see whether I should be spending more on them than I tend to.

For me, one of the most interesting things was how different they were in size when lined up together. All of them were the right size for me – whether it be a size 8, a 26″ waist or a “S” but the pic at the top shows the variation in their actual size. There’s a huge difference in pairs 3 and 4 from the left. It’s all to do with their composition and the quantities of polyester and elastane in them.

I was going to do this post on a “guess which pair costs the most” type basis but I figured that I’d probably end up getting it all around my neck, so I’ve kept it simple, showing you the label from the jeans followed by two pics of me in each pair. I was going to include a shot of me in each pair from behind so that you could see the shape and size of the pockets – but I decided that that was just asking for ridicule. In all honesty I’m not sure that they really look that different but anyway, see what you think!

At £22.99, this pair from New Look was my cheapest. The composition of them is 99% cotton and 1% elastane – although they feel as if they have more than only 1% elastane. I’m wearing a size 8, 32″ leg. The stitching is blue, rather than the usual orange – and I quite like that. As soon as I put them on, they were incredibly comfortable. They have a good rise to them, although they are slightly looser around the knees than some others. 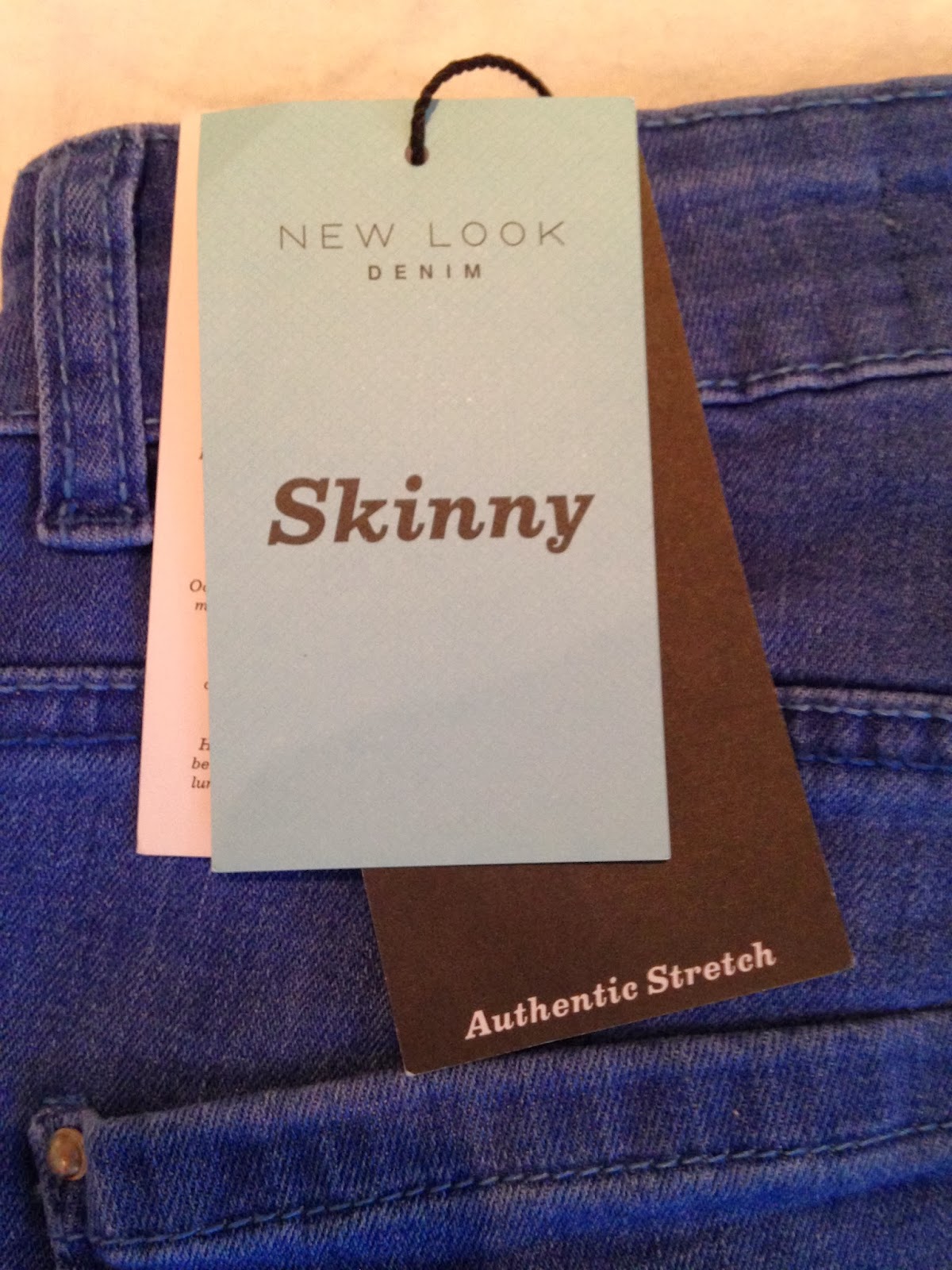 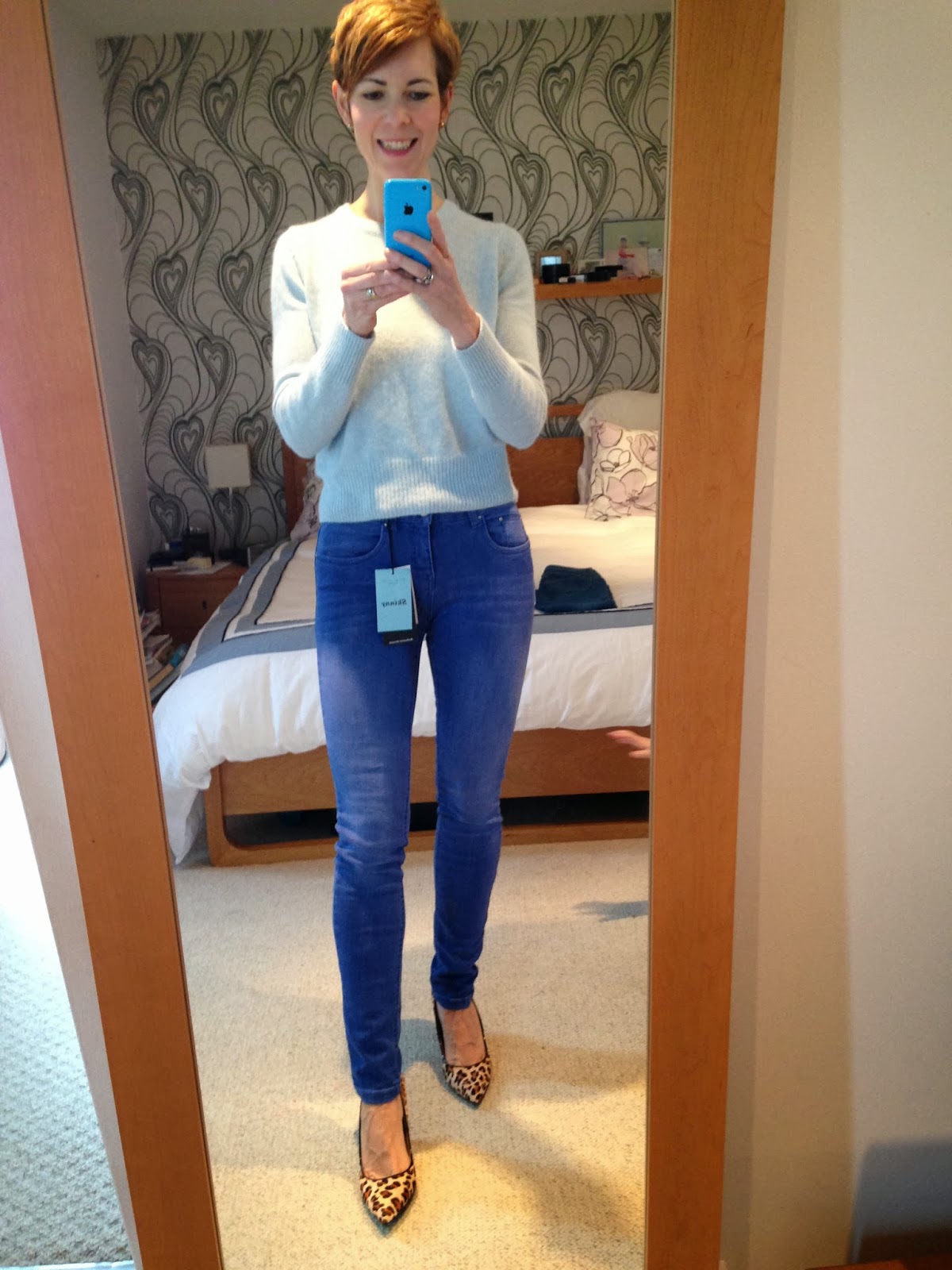 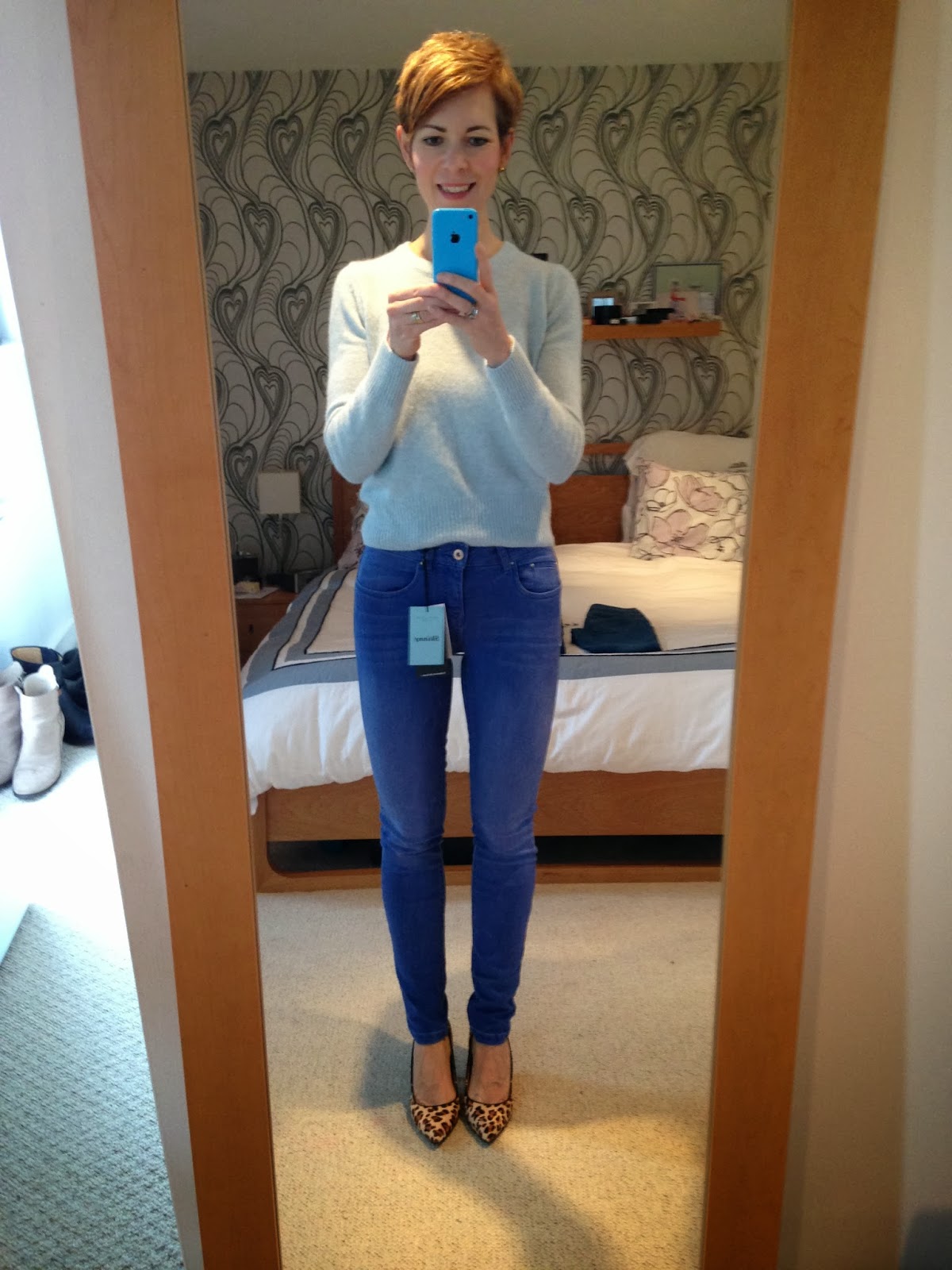 At £95, this pair from Whistles were the most expensive. I started off in a 28″, went down to a 27″ and ended up in a 26″. They don’t do a 25″ but do do a 24″ which is interesting. I like it when brands do in between sizes, just because it all helps. The composition of this pair is 92% cotton, 8% polyester and 2% spandex. I felt that the shading over the thighs was a tad too light for me and also, somehow they didn’t move WITH, me but rather they did their own thing, which was odd give their polyester and spandex content. The pocket shape and positioning on the back was good though. Additionally they had a good rise on them and they were snug enough on the legs. 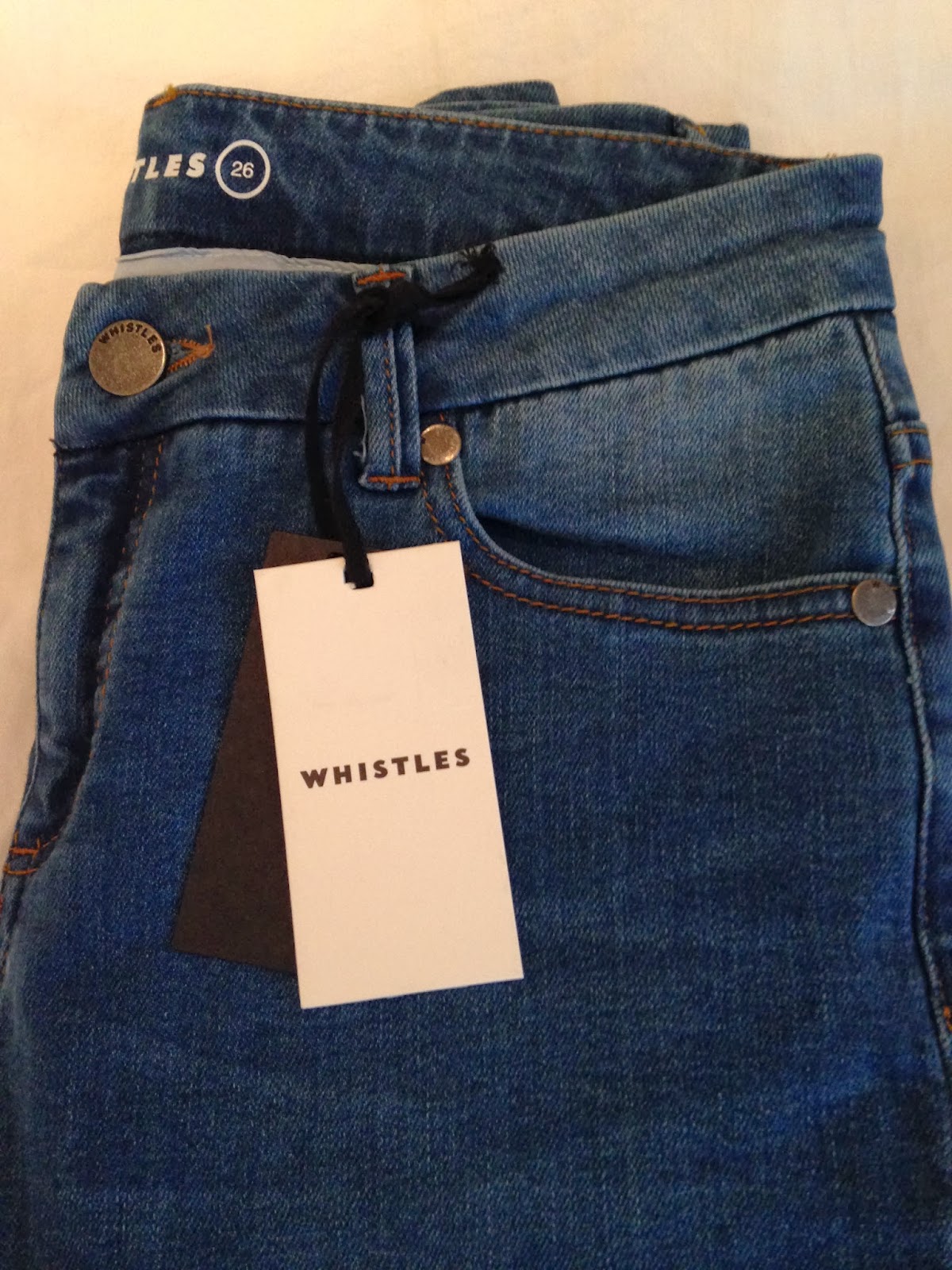 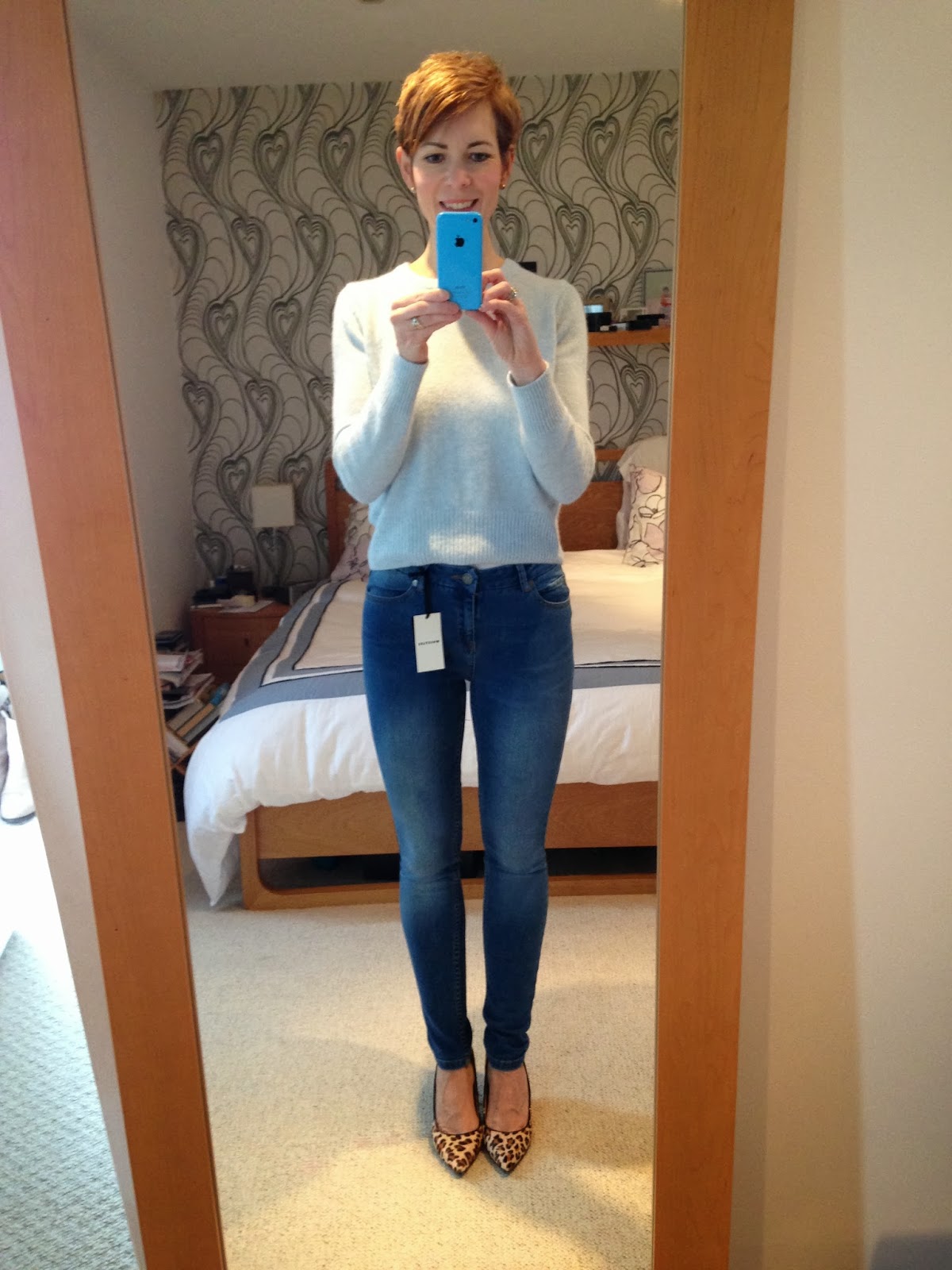 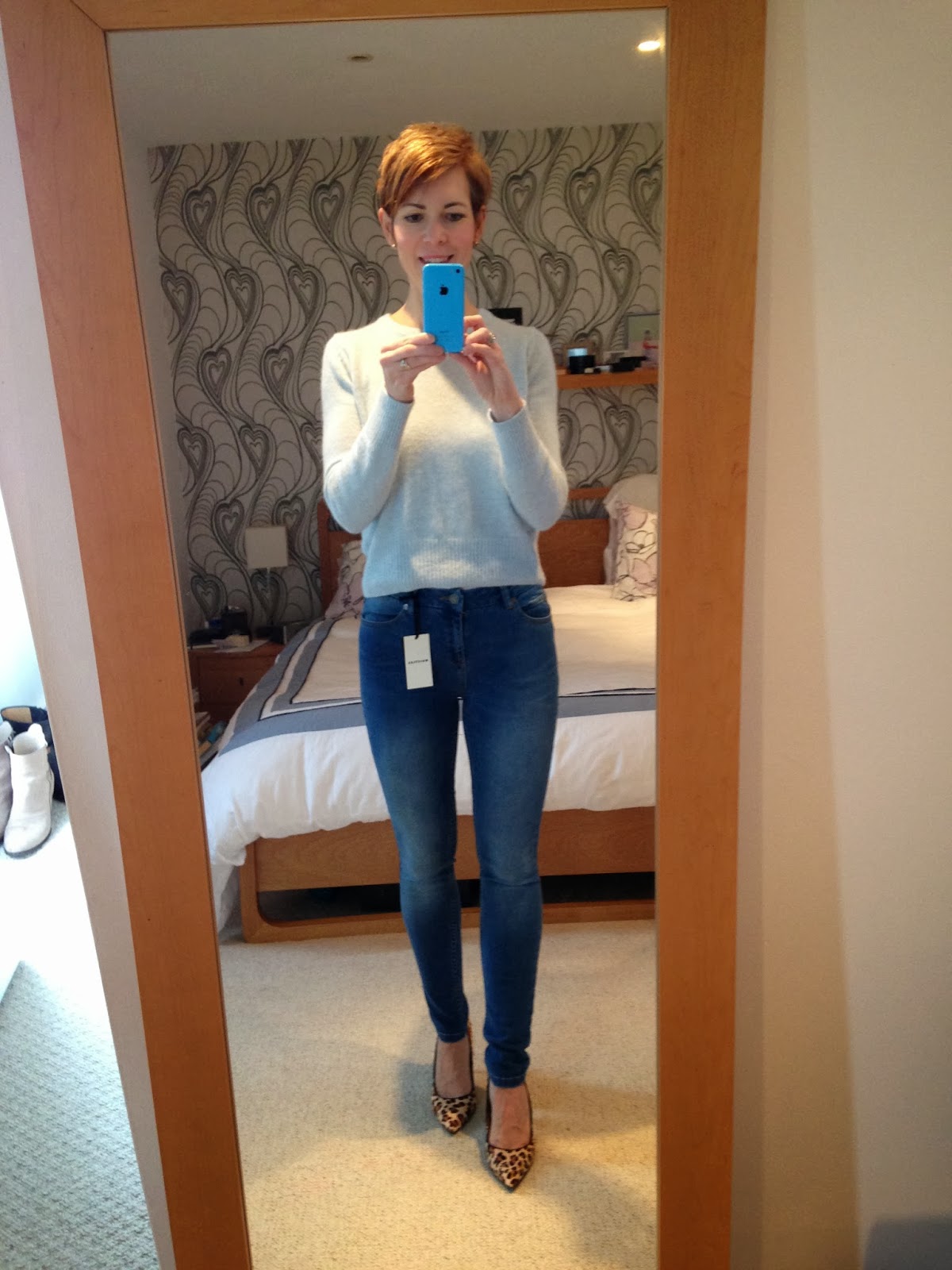 These legging jeans from GAP were £49.95.  I asked our eldest her view on the jeans and these were probably her favourite but I must admit that I did feel like I was wearing a pair of tights – which for the record isn’t necessarily a good thing. I felt that every contour would be on show and whilst possibly good for a night out (in somewhere pretty dark), I would have felt a little self conscious wearing them in the day. The composition of these is 66% cotton, 31% polyester and 3% spandex. They definitely sucked me in – not in an uncomfortable way – but I wouldn’t have felt happy in them.  So for me they were a no. 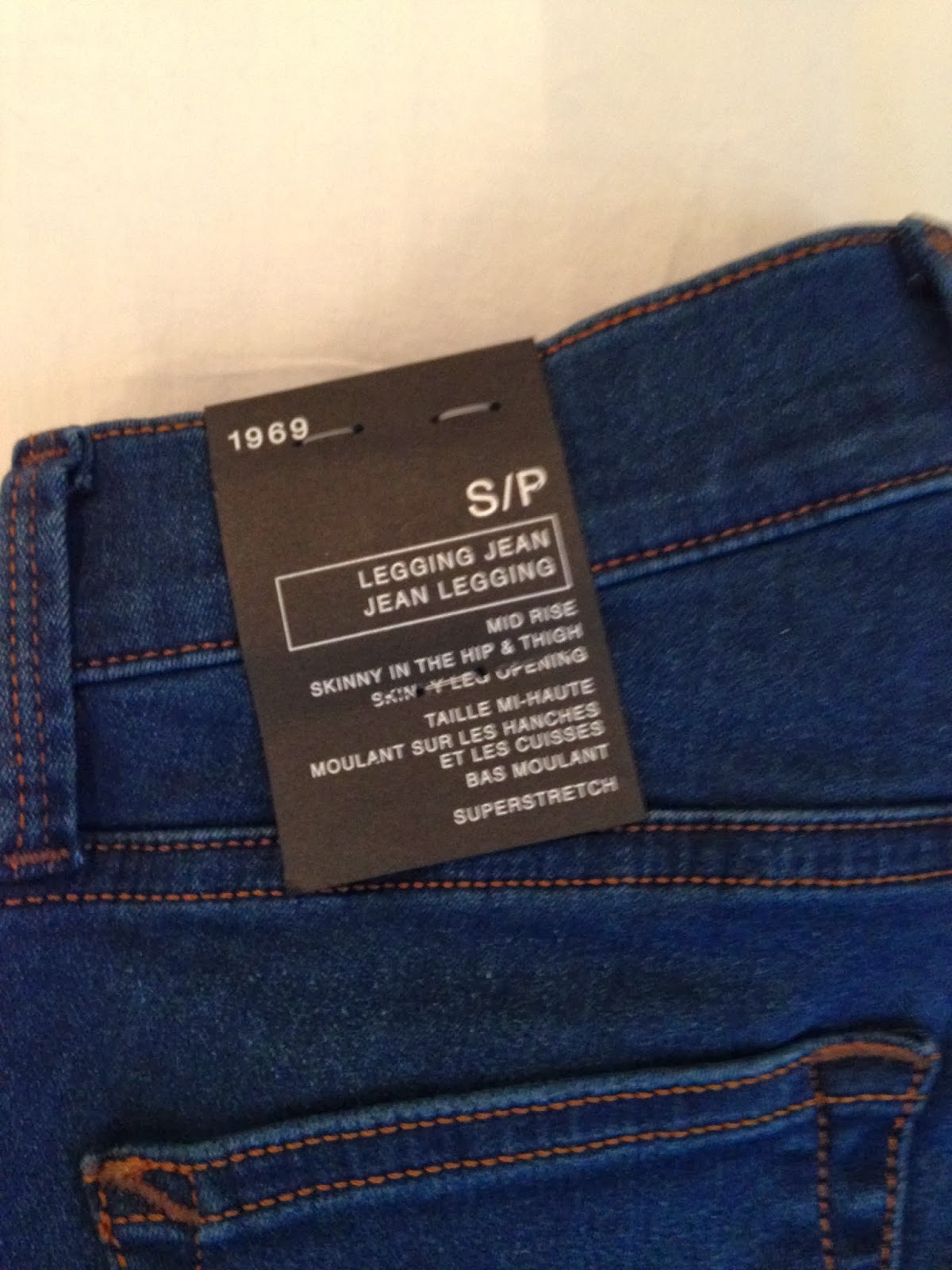 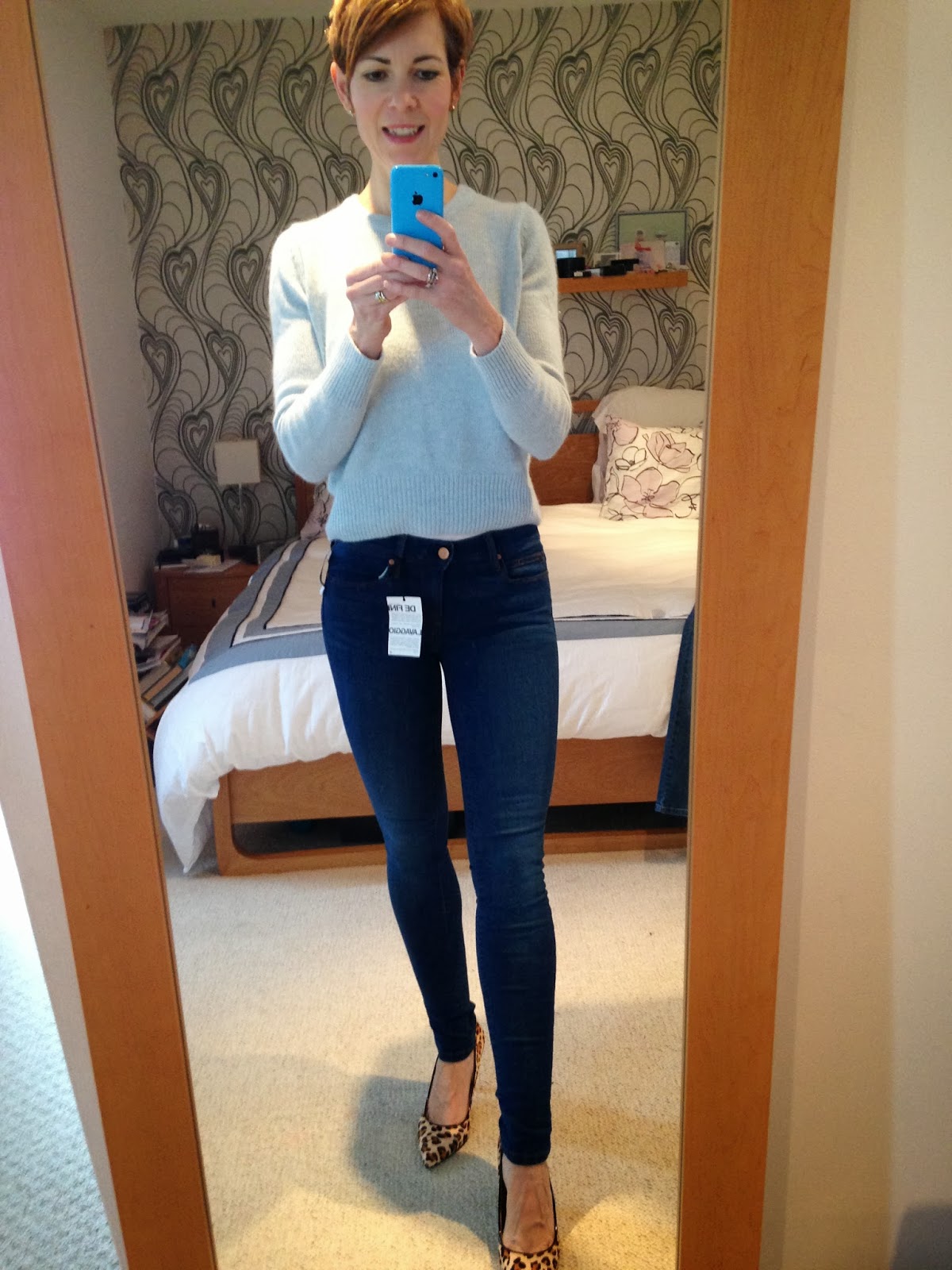 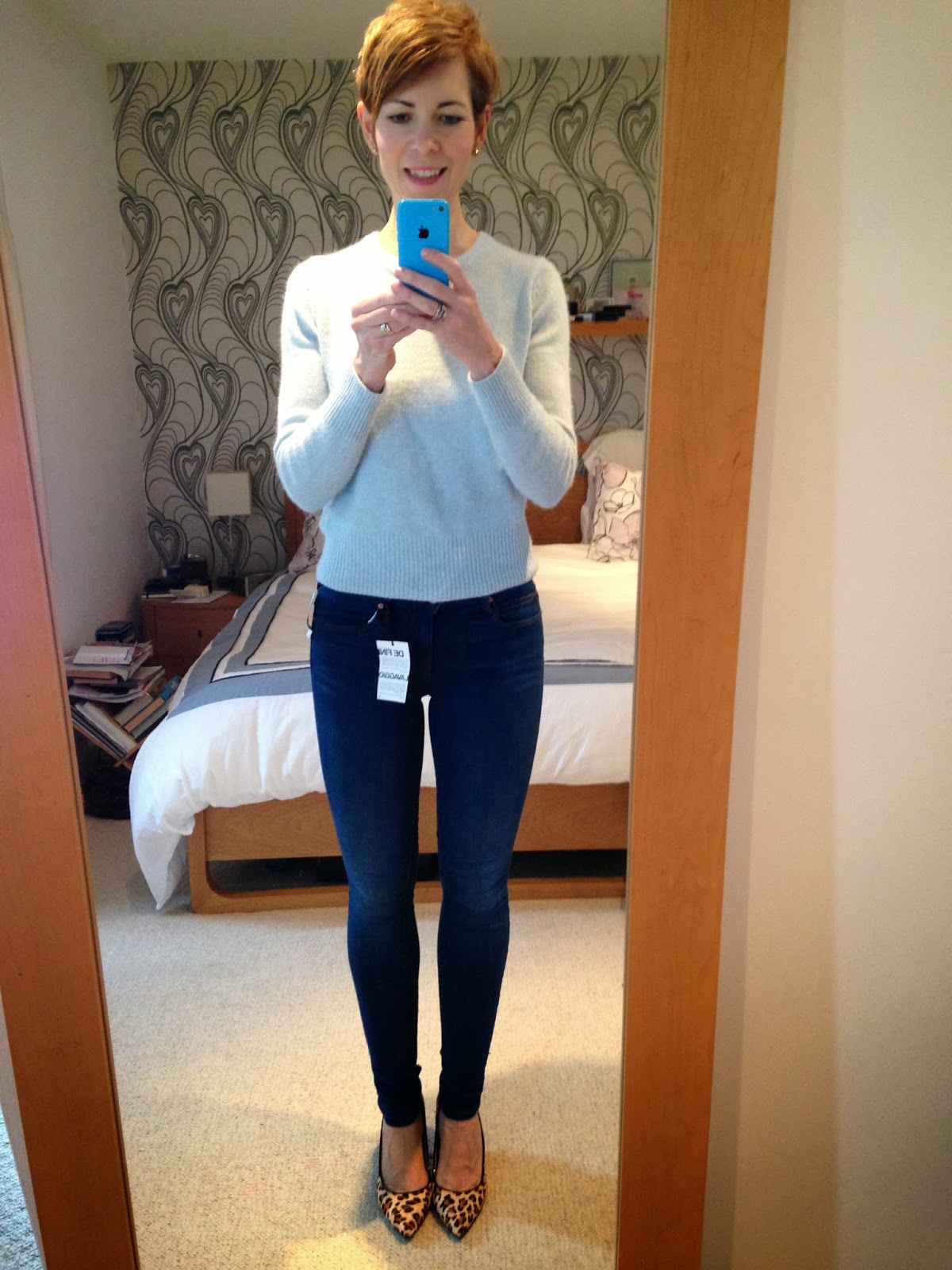 The GAP Always Skinny cost £44.95 and their composition was 87% cotton, 12% polyester and 1% elastane. I found it quite easy to discount these as the colour was too similar to some that I have already and the rise felt a bit low compared to the others. Also they weren’t as skinny around the ankle as I wanted. And I so wish that GAP would do something about the pockets on their jeans. They haven’t been changed in years and they are just a bit plain. Overall they’re not a bad option though. 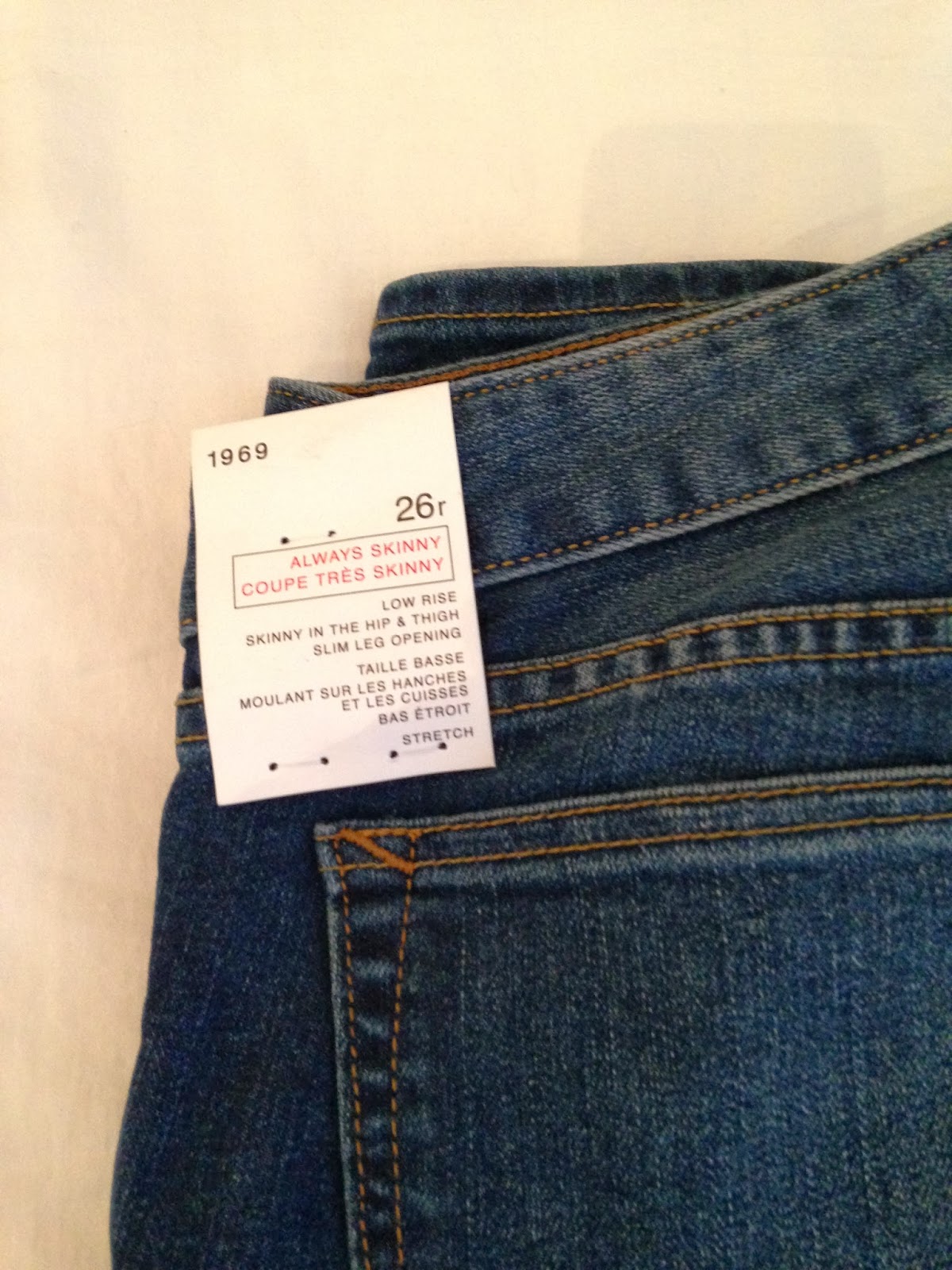 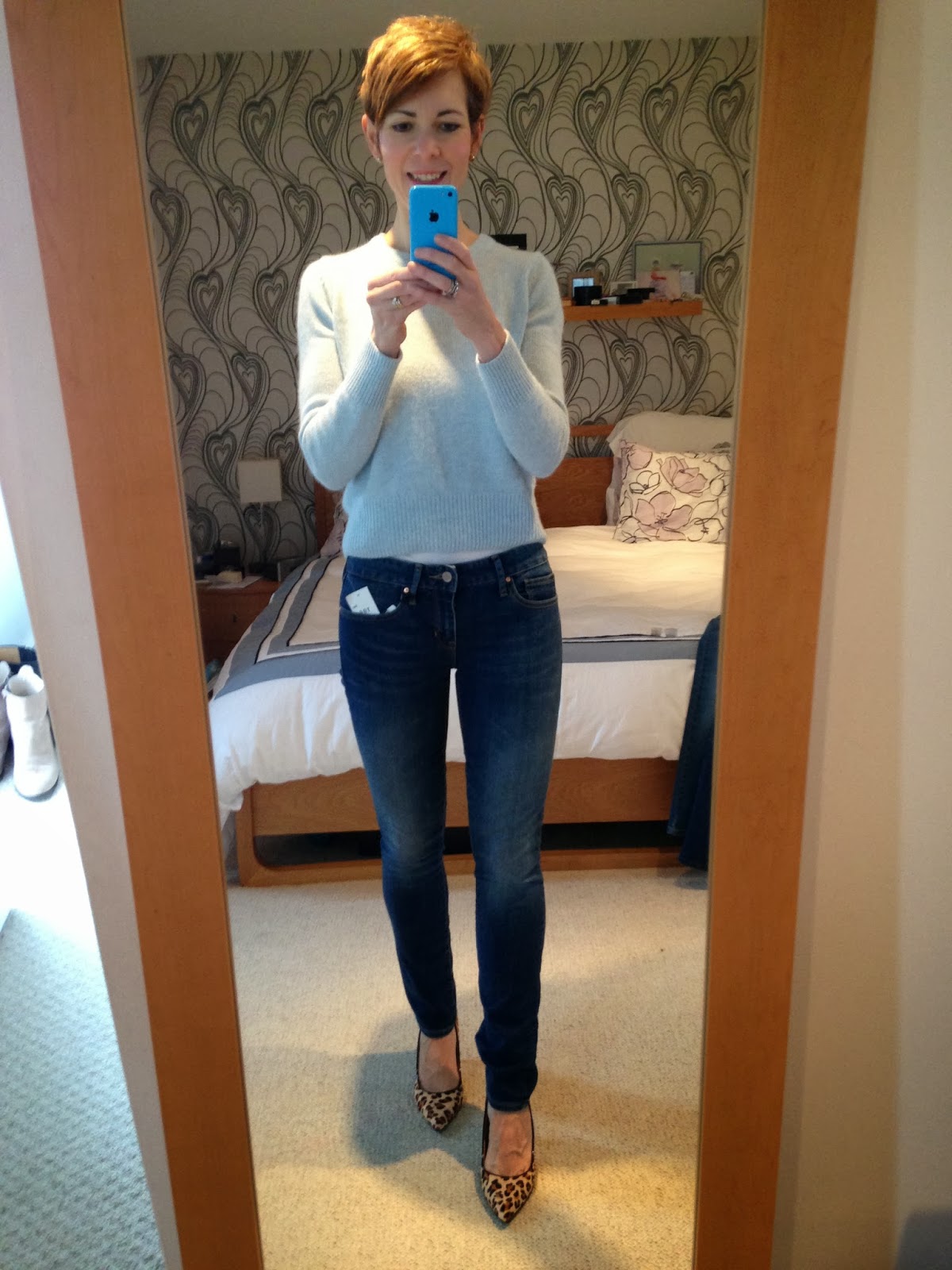 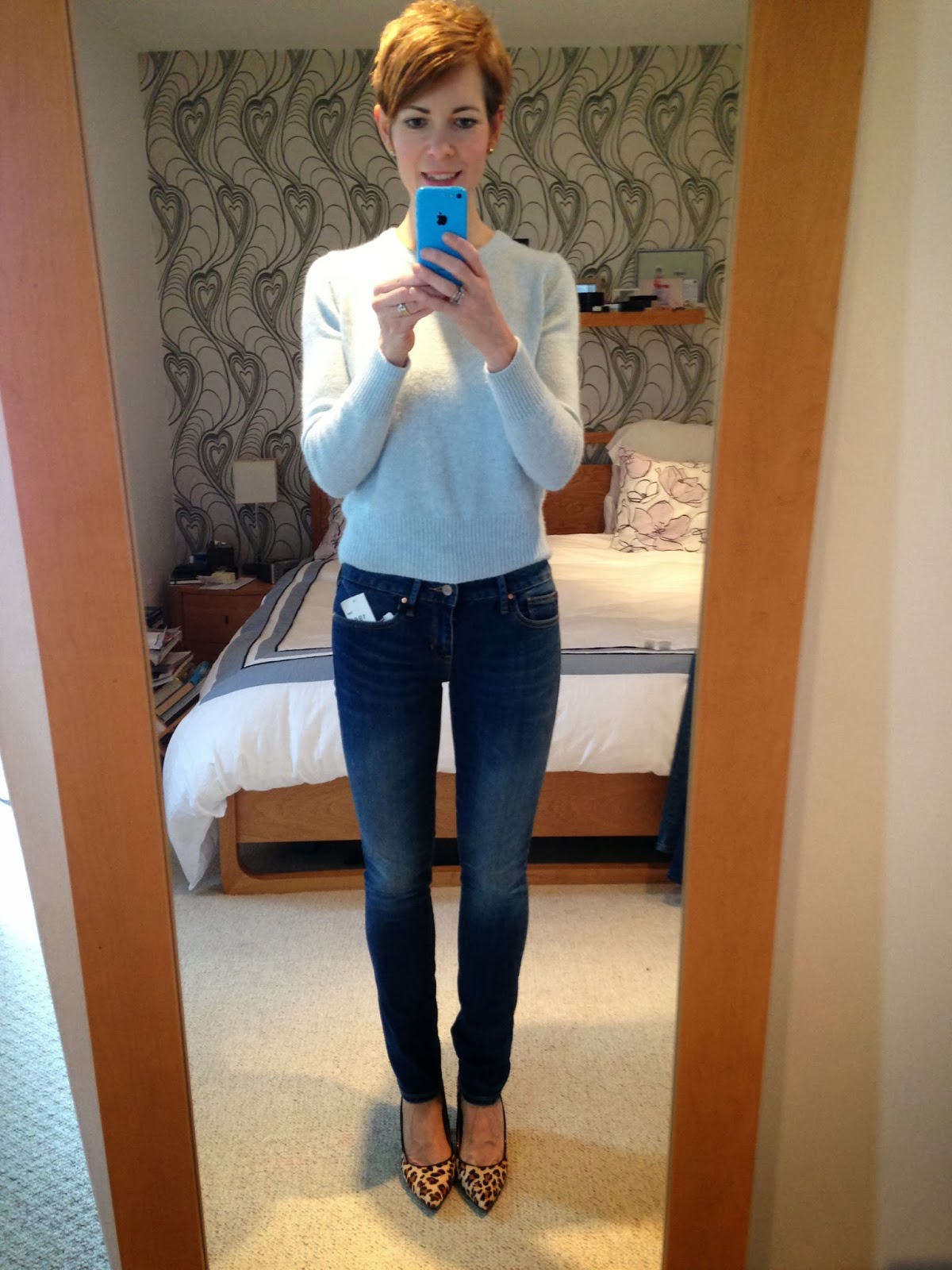 So, the contenders for “Spring Jeans 2014” were the New Look ones and the Whistles ones. Which do you think I went for? I have to say that I have had enough of trying on jeans to last me for quite some time, so I won’t be repeating the experience again in a hurry!

A note about jeans buying: The most common mistake to make when buying jeans is to buy them too big. I know that it’s hard to buy something which feels slightly on the small side but that’s exactly how jeans should feel in the shop. The denim warms up when worn, and gives, making them bigger. I often wear jeans at home for half an hour or so before taking the labels off – just to be sure. The addition of spandex makes the problem less severe than it used to be as the fabric springs back into shape more easily but it’s still one to watch.

The other thing to look out for is the composition of the jeans. Whilst this is a personal thing, I don’t particularly like the feel of the ones that have a lot of polyester in them – which is a relatively new development. They feel a bit “slimy” to me and I prefer the combination of cotton and spandex. The downside of course is that they don’t fit quite as snugly but there’s always a trade off in life!