I was invited to a friend’s birthday party on Saturday night (complete with a visit from an ice cream van) and in keeping with my plan of showing you a dress a day, this is what I wore.

It was fantastic; a beautifully warm and balmy evening, perfect for pimms, fizz, a barbeque, live music and a cleverly re-worked Lily Allen song, which a close friend of hers sang brilliantly. I was so happy that the weather was good as I also share a July birthday and I know how often it can rain. Rubbish weather in January, that’s a fair cop. In July? That’s just not on. The warm weather meant that, for once, there was none of that pretending to be warm business, when really you’re freezing your whatsits off. 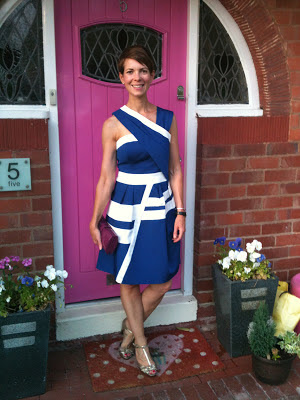 I bought this dress from Reiss in Bicester just over a year ago, on a shopping trip during which our eldest daughter described me as a ninja shopper, due to the way I flick through the rails with a “no, no, no, no, no, yep – that might work” approach.

I bought the dress without an event in mind, knowing that one would crop up at some point in the future. I liked the colour, the emphasis at the waist, the fact that the horizontal lines around the hips were broken up by a stronger diagonal line, the asymmetric neckline, the shoulder flash and the coverage elsewhere. Clearly no-one else agreed with me, which is why it found itself unloved and unwanted on a rail in Bicester but then again that’s also why it cost less than £65 – so I can live with that!

This was its second outing so it has plenty more life in it yet, although being quite distinctive it’s not the sort of dress that can be styled in lots of different ways. I just wore it with my husband’s watch and a bangle studded with diamonds and pink sapphires which my husband bought for me one Christmas when I was 39 weeks pregnant with our youngest. Not only a pretty present, it was a pity present. You should have seen the state of me. Never mind, that time has passed and I still have the bangle to show for it (and the child too!) 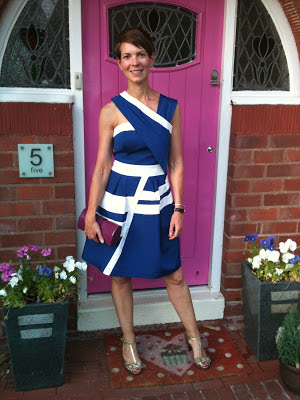 Realising that thin heels would be a ridiculous idea on grass, I wore 1940’s style gold t-bar sandals with a stack heel from Carvela, bought for half price in Selfridges five years ago now. I bought them having seen Kate Moss wearing these gold sandals to Leah Wood’s wedding at around the same time. I thought that it would be nice to own something similar and as I walked through Selfridges one day, they jumped out at me. OK, so I doubt that KM’s cost £45 ish from Carvela but I prefer mine due to their grass levitating qualities. KM’s would undoubtedly have sunk without a trace. Having said that though, I wouldn’t mind a nosy through her wardrobe sometime, just to see what else is lurking there.