It has to be said that my husband is far too good a cook by anyone’s standards. Combine that with a son who has a penchant for baking chocolate cakes and this is not a house to be in. Which is why I find myself blogging from my bed – it’s the only comfortable place to be right now.

With friends round for dinner last night, brunch today and home made calzones this evening, it’s all I can do to lift my fingers to type. Added to which I had the bright idea of doing a blindfolded chocolate tasting session as part of the Mother’s Day activities. Never to do things by half, the family bought 17 different types of chocolate to try. I gave up at ten. Those rows of Easter eggs in the Supermarket hold no temptation for me right now. Give it a couple of days and I am sure that it will be a different matter but as for now….

Fashion seems to be standing a still at the moment. I cracked out the converse a few weeks ago, only to return them to the wardrobe when my feet nearly fell off through being cold. We have had snow flurries on and off all day so it doesn’t feel as though we are any further forward than we were just after Christmas. However even if it’s still the same jumpers and jeans being worn on a rotating basis like many others, that doesn’t stop me from planning.

I had a brief trip to Bicester last week, which saw this All Saints dress come my way. Reduced from £110 to £33, I really liked the print and the fact that it was slightly longer at the back than at the front. I can do a little layering with it when it finally does start to warm up and when it’s really hot, it will work pretty much on its own. 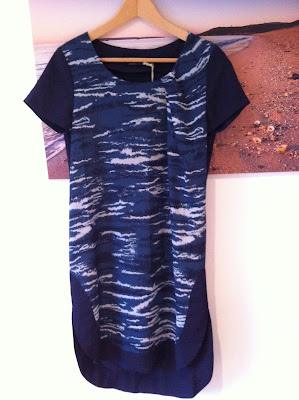 I am a big fan of Hobbs NW3 shoes and liked that these were a little bit quirky. Reduced from £189 to £45, they will work with the above dress, tailored ankle length trousers, wide and skinny jeans and I have a couple of skirts in mind to wear them with too. Still need the sun for these though! 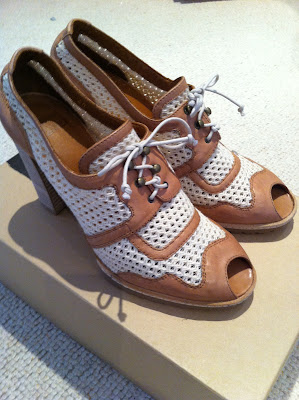 I love All Saints for their leather jackets, particularly when they are on sale at Bicester. With all things metallic being so big for s/s ’13 I thought that I would show you this silver one, just in case anyone was on the hunt for one right now.

I also spotted – excuse the pun – this spotty dress in Hobbs. For those of you who have been reading Style Guile for a while, you will probably recognise it as one that I have worn on here several times. I know that there were some of you who were after one and for a while they were hard to get hold of but there is a good stock of them at the Hobbs in Bicester and in all sizes too.

Whilst flicking through the Johnnie B catalogue this week, I also came across this quilted jacket. You may remember that I wrote a post about them a while ago now, including some from Anthropologie, Zara, Hobbs and I have also seen one in Monsoon too. I really like this navy and white spotty one with the floral trim and at £38 it may be worth a whirl. The link gives a much better idea of how it really looks. I suppose there’s a risk that I could bump into an 8 year old wearing one but if it’s the right jackt for me, I’m happy to take the risk.

Moving on to a different topic of conversation, Dungarees – would you or wouldn’t you? My initial reaction was not in a million, no way, never, been there done that at University with monkey boots, just for good measure. I haven’t deviated far from that position but think that they actually look OK in the picture below. This is probably the first photograph of dungarees that I have seen on a non-model and I like them on her. I’m still not saying that I would go there but I can see the appeal – slightly. These are from Topshop but I can’t see them online at the moment.

As an alternative, Topshop has this frill pinafore by JW Anderson – £75. This is a back shot, just in case you were wondering about the dodgy design! I really like these but maybe it’s because I have a Muji apron which is really similar in design, which I also like wearing. Some things just can’t be explained, so it’s best not to try to.

River Island (£40) has these dungarees which are in a smarter, non-denim fabric. I can see these appealing to those who have already worn denim dungarees and who are looking for a pair to wear in a more sophisticated way.  I can imagine that you might still be likened to a three year old in them – and no doubt there would be retorts from witty males – but again, I can see the possibilities for them, just not for me. Not yet at least. What say you?