On Sunday morning we were invited to an impromptu brunch at a friend’s house. Cheekily I had requested the help of her hubby to sort out a technical issue I had with some photos I was sending through to a magazine and it went from there really. I have to say it was a top brunch – bacon, pancakes and maple syrup. Yum! 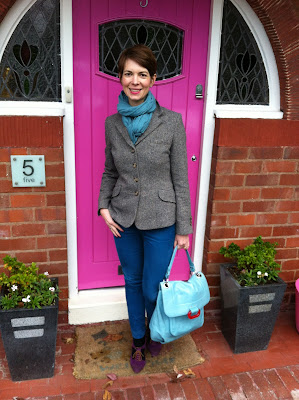 My friend grew up in deepest darkest Devon where shooting, hunting and fishing were a way of life, rather than a hobby, so I thought that she would appreciate this Thorpe jacket from Hobbs. Her response didn’t disappoint. I seem to recall a few jokes about me leaving my horse behind!

I really like the whole Heritage trend and it is a nice way of wearing a blazer which isn’t too corporate. There are some great ones out there this season from Marks and Spencer, to New Look and Zara. Although, for me, one piece at a time is enough. 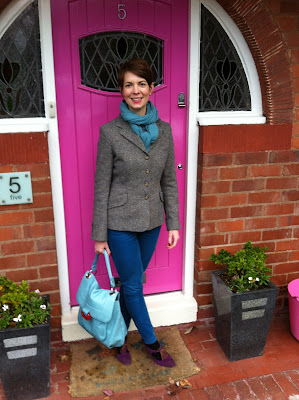 Afterwards we were showing our faces at a Christmas party at my husband’s work. It was really for the children and involved a Santa’s grotto, face painting, craft – you get the idea. I knew that it would involve a bit of sitting on the floor and there’s always the risk of sitting in a squashed mince pie, or getting face paint wiped on me, so I wanted to wear trousers that would be easy to wash but which weren’t jeans.

Poor Santa got more than he bargained for when he asked her youngest what she would like for Christmas. She looked at him indignantly and asked “Haven’t you read my letter?” Well that told him.

The jacket has a blue fleck running through it, which I picked up in the Gap cords, Mango scarf and Orla Kiely bag. My NW3 Hobbs shoes were lurking in the hall as another friend had borrowed and I just fancied putting some burgundy into the mix – so I did!