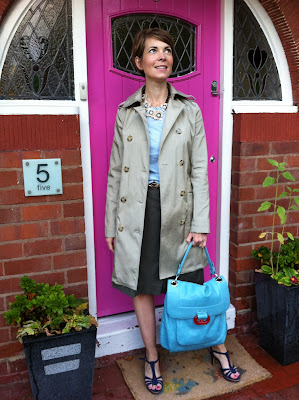 I know that it looks like it but when this photograph was taken yesterday morning, I wasn’t really looking to the skies, thanking the Lord that the day had come for the children to go back to school. Honestly!

I don’t know about anyone else but by lunchtime (not before you note!) I really missed them. I even detoured on the way home from Homebase via our eldest’s school to see if I could catch a glimpse of her.

Anyway, given it was the first day of the new term, I thought that I would give my new trench coat an outing.  I had been on the look out for a new one for ages as my Zara one was a bit shabby and I always felt a little self-conscious in it. I had looked at one in the sale in Aubin and Wills earlier in the summer, checked out the Burberry ones at Bicester and also the new season Hobbs and LK Bennett ones but nothing really grabbed me.

I then went into All Saints and found this one in the sale, reduced from £295 to £147.50. What I liked about it was the finish on it. The colour is described as Oyster and it has a slight metallic finish/sheen to it, which is better against my skin tone than a flat finish – especially a biscuit flat finish which makes me look either anaemic or slightly jaundiced. Lovely.

For this first outfit, I was wearing it with a Jigsaw skirt, Hobbs top and necklace, Topshop leopard belt, Zara shoes and Orla Kiely bag.

Number 3 (she who told our neighbours that I was out at the weekend getting drunk and that I had left her in the car on her own whilst I went to Wagamamas for lunch) was in charge of the camera today and refused to take a photo until I said “sausages” – hence the ridiculous grin.

Today I wore it with GAP cords in blue (these are the same style as the berry ones I had on on Saturday. With 30% off at the moment they come in at less than £30), Dune brogues, Ted Baker floral top, same bag!

Here you can get a better idea of the finish on the coat.

and also here too.

I can’t find the trench on-line but should anyone be interested in the details, here they are on the tag. Just so that you know, they do come up quite big.

I also had a quick look in Mango today whilst in town and the suede jacket which I showed yesterday is lovely. Very heavy and nicely finished. Next didn’t have the heeled loafers in and the best alternative I could find to the Russell & Bromely ones were these Andover high heeled penny loafers in Dune, which cost £75. They still aren’t quite there for me but are probably the closest to be had for now.

Hope that you have all had a good day. Do let me know if you find any new season fab pieces!