A series of posts on “hero” brands wouldn’t be complete without the mention of another of my favourite, fail safe, never let you down brands – Hobbs. Originally a shoe brand, Hobbs opened its first store in Hampstead in 1981 but after its huge success, the brand created a complementary clothing collection. The brand represents a British look but with a contemporary feel and is known for its quality, craftsmanship and attention to detail.  Under the Hobbs umbrella there are several brands, including Hobbs Unlimited, Hobbs London, Hobbs Invitation, the Hobbs 30th anniversary collection and NW3 by Hobbs.

I have been shopping in, or more often than not admiring, Hobbs for many years now. My first purchase from Hobbs was a pair of Marilyn Anselm shoes which I bought from the small (as it was then) Hobbs in Covent Garden when I qualified as a solicitor in 1995.  My first pair of leather soled shoes, I wore them for years and years before packing them away ten or so years later. I can’t bring myself to part with them, even though I am unlikely to wear them again.

My second big purchase from Hobbs was a pair of knee high black leather boots which I bought when I moved up to Birmingham.  That was before the stand alone store had arrived but when Hobbs had a concession in Rackhams, as it then was.  I remember that they cost £160 – even then, 15 years ago.  It was a small fortune but I knew that they would be with me for years – and they have been. Each Winter I bring them out and give them a polish. I love those boots still, despite the fact that they would now be considered a little “retro” in their styling.

The morning after my husband and I got married in 1999 I wore a Hobbs top to breakfast, with a grey skirt, Whistles cardi and the Hobbs boots.  My fondness for Hobbs clothes continued into workwear (from Bicester Village – such an advantage having in-laws who lived close by) knitwear, more shoes, pieces of statement jewellery and the occasional dress.

The arrival of a stand alone store in Birmingham, next to Jigsaw, was heaven! Lunch hours were spent wandering in there with friends, plotting our escape from private practice where we worked as solcitors.

The launch of NW3 brought a whole new meaning to Hobbs.  I loved the fact that this new, trendy and slightly quirky, sub-brand was named NW3 after the first branch of Hobbs ever opened, as that was also my “local” Hobbs when I first lived in London.  I love the NW3 shoes and have bought a couple of pairs……

I also love their jewellery too.  This is one of my favourite necklaces… 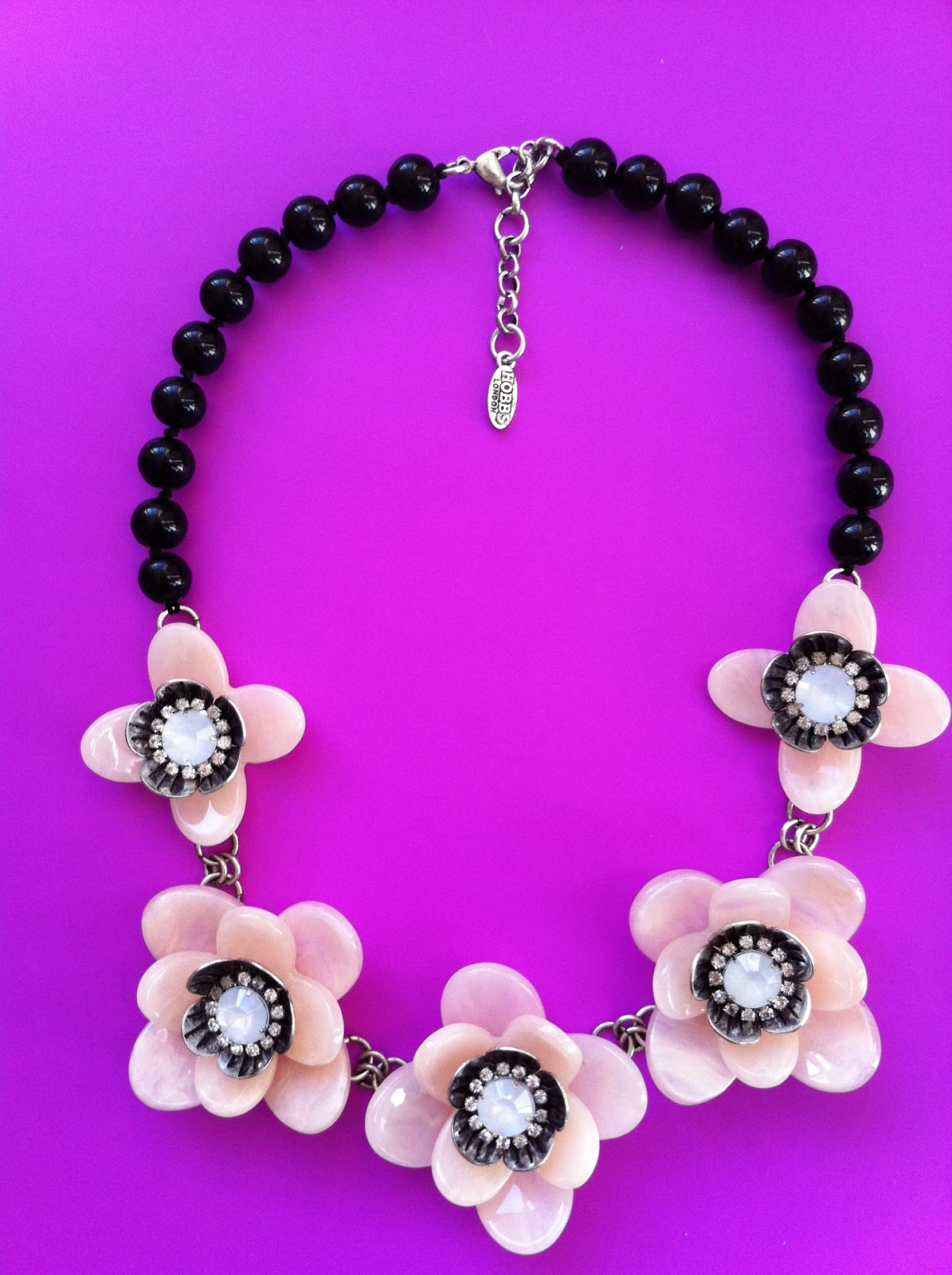 and their scarves, which are so very English (or in this case, French!)

Most of all I love their good solid foundation.  The introduction of NW3 brought an edgier element to their look but they have kept true to their roots with knitwear, work shoes, ballet flats and occasion wear.  And for those of you who don’t already know – I really rate their jeans – I just wish that they would make them in a longer length!

I have just received this evening, these navy patent loafers, which I think will look great in the summer with capri trousers.  Flat but smart and still great for running after the scootering four year old! I had to order them on line as I take a five and a half and the stores don’t tend to stock the half sizes – but it’s good to know that they can be obtained on line.

I recently ordered this Bryony dress from Hobbs to wear to several events that I have coming up in the near future.  I love spots and that combined with it’s three quarter length sleeves, knee length and neat silhouette means that I know it will work hard for me. I plan to style it variously with a cropped cashmere cardi, cream leather biker jacket or blazer, depending on how I feel and I also bought a pink patent belt to wear  with it, just to lighten it up a little.

And the great thing about Hobbs is that they have cracking sales – not just the odd 10% off but proper reductions. So for many items it is possible to identify what you like and then swoop when the sales start. I have seen work trousers reduced from £139 to £35 and less – now in my book that’s a proper saving.

I love taking my clients to Hobbs, if there is something that I feel will work really well for them in there – such as their jeans, their bolero cardigans, work clothes or occasionwear. I have styled ladies in there from 25 to 65 and that is the beauty of having so many brands within a brand – there is something for everyone.

Above all, as with my other hero brands, you know where you are with Hobbs – what it stands for, the quality and the details. It is also a nice experience being in there –  a little naughty, but very nice!